The fifth HASTAC conference, HASTAC 2013: The Storm of Progress, is taking place in Toronto this weekend. I can’t be there, but Fiona Barnett, the amazing and wonderful director of the HASTAC Scholars program, invited me to contribute to a panel on building scholarly community via a recorded video message. Thanks to Twitter, I got to see my face on a terrifyingly large screen, here with panelists Viola Lasmana and Amanda Phillips: 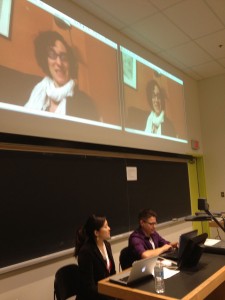 I discovered that I wasn’t able to speak into a camera directly without a script, so I wrote out what I wanted to say in advance. Here it is (and if you really want to see the video, you can download and unzip the Quicktime file):

Hi, I’m Alexis Lothian. I was a HASTAC Scholar from 2010 to 2012 and I am now Assistant Professor of English at Indiana University of Pennsylvania. I’m recording this in Pittsburgh and I’m really sad I can’t be with you all in Toronto. Thanks Fiona for inviting me to be a part of it anyway.

Fiona asked us 1) Why building community is important — both personally and politically. Why do it? Why are people scared of doing it?
2) How you’ve built community specifically
3) What you’ve learned in the process — how can others do the same? How can they start small? How can they get connected? What are the potential pitfalls?

How have I built community? I never really did it on purpose; I was drawn into academia by the communities and knowledge networks I was a part of, rather than looking for them once I was there. I came to my academic projects through science fiction and fan studies, in which I was been part of online communities; when I entered academia it was via queer and feminist and ethnic studies work that is connected to political and artistic grass roots movements, and I’d been a participant in queer and feminist online communities since undergrad. It was that experience of online community, the way the personal and intellectual and political were mixed up there, that started me thinking and writing about digital media.

When I started to explore DH as a graduate student I found HASTAC, and I was suspicious at first of what it would mean to try and organize a network of scholars, because it seemed like something that should happen on its own. But I realized as I got more involved in HASTAC that the network was doing something incredibly special, giving an institutional and recognizable home to the work of community building that some of us were doing anyway, and making it open to more and more diverse scholars and students.

Together with blogging and being on Twitter, HASTAC gave me the tools to turn online conversations not just into real friendships but into critical and scholarly interventions in academic fields. — meeting Amanda and Marta because we were tweeting queer studies panels at MLA, and that leading to THATCamp and to TransformDH.

Why is community important? Tara McPherson, one of the members of the HASTAC steering committee, talks often about the dangers of academic silos, of intellectual work only being counted insofar as it contributes to restrictively defined degrees, departments, disciplines, institutions. When we make interpersonal connections with others whose work is different from but related to our own, we begin to build the potential to break that down. And if we are graduate students or junior scholars we get to see that the hierarchies in which our work is counted and the ways in which it is valued are not universal. We can get support for what we are trying to do even if everyone in our immediate vicinity thinks we are off our heads.

I think community is also important for the world beyond scholarship, though: conversations beyond what we consider to be our field can keep us accountable. Scholars whose work is connected to marginalized communities are more used to thinking about accountability, but I feel as if it applies to everyone, and that being open to being held accountable is part of what we need to build in to community. It might mean asking us to define terms that we think are obvious but that we have a hard time explaining when it comes right down to it; it might mean learning to expect that when we write about somebody’s experience or somebody’s creation, we’re beginning a conversation with them as well as about them. It might mean letting go of ownership of what we think is our work, what we think of our fields.

One of Fiona’s questions was why are people afraid of building community, of moving out from departments and disciplines? If they are, I think probably it’s because that potential for what I am calling accountability is a scary thing for scholars. What if you’re writing about a community and someone in that community disagrees? What if you make an idea public and somebody takes it out of context, or claims it as their own? With TransformDH, one of the tensions I think all of us in the originating group have had to contend with is: are we doing this for our CVs or is it something we should let go of, something bigger than us? I think we’ve chosen the second option.

Maybe it’s safer to think of ourselves as working individually, especially given the scarcity of academic jobs and funding that we are competing for. But it’s also lonely.