The last panel I attended at ASA was the one that I participated in:

Before the panel, Fiona made this post on HASTAC to explain its purpose and seek collaborators.

During the panel, Fiona took this picture of Moya (left), Simone (right), and I (middle): 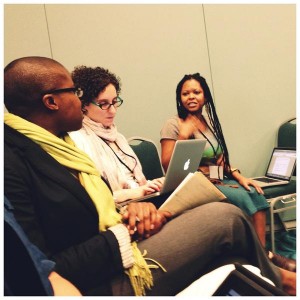 As you can see from my intense laptop-attachment in the picture, I did my best to take notes while on the panel. But, as fits the distributed, open, online forms of knowledge production we are trying to channel and harness in #transformDH, it was documented, shared, and is being discussed from multiple directions. My notes are below, and they’re followed by an embed of the Storify that Moya Bailey created –– in which, as you will see, Megan Turner (whose jailbroken iphone provided some of the only reliable wireless access at ASA) does an incredible job of documenting and commenting.

Simone: this will be an informal panel, telling stories as a form of inquiry.

Referring to the handout we made in the absence of wireless internet to share it online, Simone reads an invocation from Tara McPherson’s “Why are the Digital Humanities So White?”. Tara was supposed to be chairing this panel but couldn’t make it to ASA.

“We need new hybrid practitioners: artist-theorists, programming humanists, activist-scholars; theoretical archivists, critical race coders. We need new forms of graduate and undergraduate education that hone both critical and digital literacies. We have to shake ourselves out of our small, field-based boxes so that we might take seriously the possibility that our own knowledge practices are normalized, modular, and black boxed in much the same way as the code we study in our work.”
––Tara McPherson, “Why is the Digital Humanities So White?”

Amanda Phillips stepped up to explain the origin of #transformDH as an idea. Posts explaining context are also linked at the TransformDH website.

TransformDH is a hashtag, not a group. We have become de facto representative, but we don’t want to have it contained within particular personalities or institutions.

Then it was my turn to explain the meaning and the stakes behind our use of the term “transform.” Here are the notes I prepared (though I didn’t speak from them exactly):

In talking about the term transformDH we’ve had some pushback from people who think that “the digital humanities doesn’t need to be transformed.” But we always wanted the transform in DH to index TRANSFORMATIVE: rather than making some specific changes to a clearly delineated disciplinary object, or in limiting things to the acronyms and abbreviations that we have been throwing around, we were interested in how digital scholarship can do transformative work of the kinds that American Studies is commited to. In other words, we would hope that you wouldn’t have to be on Twitter or know what THATCamp is.

In a forthcoming essay for Journal of E-Media Studies, Amanda and I called transformDH an “aggregated statement of the obvious”: the obvious being that transformative work combining the digital with ethnic studies, queer studies, social movements has been going on for a long time. The so-called big tent of digital humanities welcomes the inclusion of projects and scholars doing work on race and queerness, old or new. But we wonder about rattling the poles of the big tent rather than gathering under it…

At this conference so far, I’ve heard a lot of conversation that has helped me think further about what this might mean. Natalia Cecire was asking yesterday about alternate models of knowledge production in the digital that don’t reproduce the alienated labor models of the digital (Facebook etc) and Lauren Klein was asking about alternative origin stories. #transformDH could also be an index, an aggregate, for making those visible. At the panel this morning on difference incorporated; Roderick Ferguson and Habiba Ibrahim were talking about how important it is to think about the success of a movement outside the standards of permanence, of institutionalization. Is #transformDH digital work that doesn’t fully inhabit the academia machine? If DH is a kind of difference in academic labor that is so very easily incorporated into the neoliberal academy, how could we have digital scholarship that connects to the “difference that makes a difference” — that works in concert with radical movements past present and future, with the intersectional formations of women of color feminism, queer of color critique. Can we find ways to access the resources of DH while doing work that doesn’t fit the funding paradigms?

Moya Bailey: Working at the Digital Scholarship commons at Emory. She has always used digital tools in organising, in activism: doing digital humanities work shows the possibilities of what those tools can do. But who is working in those mediums? What and who gets represented as digital humanities? A certain intellectual trajectory in the academy, but for her it had always existed in different places.

Reading from her essay “All the digital humanists are white, all the nerds are men, but some of us are brave.” in Journal of Digital Humanities 1.1.

The ways in which identities inform both theory and practice in digital humanities have been largely overlooked. Those already marginalized in society and the academy can also find themselves in the liminal spaces of this field. By centering the lives of women, people of color, and disabled folks, the types of possible conversations in digital humanities shift. The move “from margin to center” offers the opportunity to engage new sets of theoretical questions that expose implicit assumptions about what and who counts in digital humanities as well as exposes structural limitations that are the inevitable result of an unexamined identity politics of whiteness, masculinity, and ablebodiness.

What counts as a digital humanities project? As an undergrad, I interacted with people who were actively doing intersectional digital humanities work in all but name in other arenas of the academy. Dr. Carla Stokes wrote her dissertation on the online culture of Black girls. She discussed how Black girls were using digital platforms like chat rooms, web pages, and blogs to create identity. Through the creation of the non-profit Helping Our Teen Girls, Stokes offered an alternative online network (which she built) that was peer moderated to help address issues of cyber-bullying, and the targeting of youth online by adults. Stokes work is lauded in Girls Studies and Critical Media Studies. While certainly a digital humanities project, her work has not been legible as such.

In attempting to speak to and reach communities we felt accountable to outside academia, the Crunk Feminist Collective began blogging in 2010. A collective of about ten academics and activists use social media platforms to talk about the realities of our world in accessible feminist language. This hybridizing of cultural production and a theoretical praxis, falls outside the purview of mainstream digital humanities but has been utilized in classrooms across the country.

Scholars like Lisa Nakamura brilliantly bridge both cultural criticism and digital humanities. In her recent scholarship, Nakamura examines the exploitation of indigenous women’s labor in the construction of digital devices. Far from saying people of color are not engaged in digital humanities, Nakamura’s work begs for a recentering of the conversation on the parts of the field that are messy. There is a need to address the complexities of globalization, colonization, and the alienated labor of people of color in the production of technology that advances digital scholarship practices that they will not be able to access or directly benefit from.

How and where do the humanities enter into digital humanities, and how can they change the way we talk in the field? I’ve been reading a lot of digital humanities blogs and the use of ableist language show that the work of disability scholars, while tangentially acknowledged, may not have shifted practices. Words, like “lame,” “stupid,” and “retarded” are used to describe problematic elements in the field without any recognition of their own problems. In doing the work of creating and utilizing digital tools for better digital humanities projects, shouldn’t we also be engaging the humanities themselves? There has been much needed criticism leveled at the free programing interface Codecademy. Had the creators worked with scholars in educational studies might they have produced a more accessible learning tool? In re-imagining what counts as digital humanities, we can draw on the wisdom of scholars who have addressed related issues in their own fields of study. Of all the emergent interdisciplinary spaces, digital humanities is uniquely poised to apply academic research to itself and its products.

Fiona Barnett, director of the HASTAC Scholars program (of which all the panelists are either members or alumnae).
HASTAC = Humanities Arts Science Technology Advanced Collaboratory. Explains to her mom as “the best possible cross between Facebook, the CHE, and the Huffington Post.”
A “network of networks”: users building, rather than a service being provided. If you build it they will come — no, we build stuff all the time and nobody comes! But you can build community, and that is just as tangible.
HASTAC mantra: collaboration by difference. “difference is not our deficit, it is our operating system; what we do and who we are.” Diversity and difference as an actual political engagement, not a box to be checked.
HASTAC Scholars program: 200 scholars per year, anyone can nominate a grad or undergrad student to be a scholar. A platform of legitimacy.
Most visited forums: queer and feminist new media spaces and race/diaspora in digital age: 70,000 viewers. Forums have an afterlife in classes.
Race After the Internet: amazing book came out to no fanfare. Why not? Work on race doesn’t get the attention it should. Massively interdisciplinary, too. Fiona curated a crowdsourced book review. CHE picked it up and the publishers contacted Fiona about all the traffic to their book page; they provided free ecopies to the reviewers. Now the crowdsourced book review project is being taught with the book and being used as a pedagogical model.
This was not a huge project and didn’t take a lot of technical knowhow. But it had a big impact! Race After the Internet review
TransformDH as a kind of code: not a thing itself or a secret code, but code we can practice.

Tanner Higgin: shifting into K12 context, where he has been working. The humanities in schools is very much the old school humanities — teachers may be open to new things, but they don’t really know how to give students that perspective.
Parents are skeptical about eg having students design games. Moving to a larger media literacy perspective. ARG: students got a message in their locker, contained in a tube with a pen with a ribbon and a pencil with a paper clip. Everything isn’t as it seems — start looking for other answers, start being critical.
Nonprofit education funding: everything is STEM focused, STEM is the be all end all. Yet focus is on humanities ideas like critical thinking— only humanities origin/context not acknowledged.

Simone Browne: Black Thought 2.0 conference. Groups of people mapped outside of categories who are on technology.
Learning through failure.
UT Austin walking tour. Transforming from PPT into Prezi into augmented reality. Dorm built by, named after the founder of the KKK in Florida. Was the first air conditioned dorm on UT campus, situated opposite shacks where the first segregated black students were expected to live.
Students organized to have the dorm renamed. But the renaming just meant cutting down the sign: the virtual tour ends up preserving the memory, the history.

After this point, the conversation opened up to the audience and was too active for me to participate while also documenting. Twitter and Storify do a much better job of capturing our wide-ranging conversation, but I want to pop in some links to posts that were mentioned.

And finally, here is the excellent Storify that Moya Bailey created from our event: