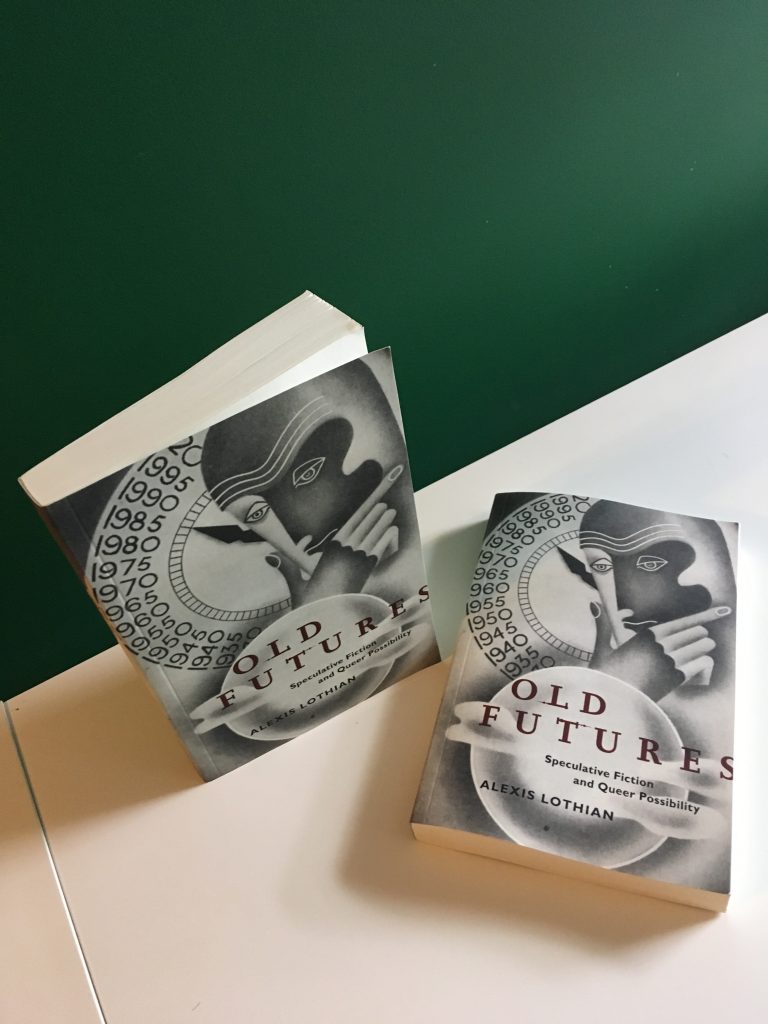 I am delighted beyond words to announce the imminent publication of my book Old Futures: Speculative Fiction and Queer Possibility from NYU Press.

As the more active early years of this blog document, I have been working on this project for a long time: first as an MA thesis on Samuel R. Delany, then as my doctoral dissertation with broader and deeper historical and interdisciplinary scope, and now as a book that – while I’m very aware of its myriad gaps and exclusions – will, I hope, have a real contribution to make to the ways that scholars (professional, fannish, or otherwise identified) talk about speculative imaginations, gender, race, and queerness.

Here’s the blurb from the back of the book.

Old Futures explores the social, political, and cultural forces feminists, queer people, and people of color invoke when they dream up alternative futures as a way to imagine transforming the present. Lothian shows how queer possibilities emerge when we practice the art of speculation: of imagining things otherwise than they are and creating stories from that impulse. Queer theory offers creative ways to think about time, breaking with straight and narrow paths toward the future laid out for the reproductive family, the law-abiding citizen, and the believer in markets. Yet so far it has rarely considered the possibility that, instead of a queer present reshaping the ways we relate to past and future, the futures imagined in the past can lead us to queer the present.

Narratives of possible futures provide frameworks through which we understand our present, but the discourse of “the” future has never been a singular one. Imagined futures have often been central to the creation and maintenance of imperial domination and technological modernity; Old Futures offers a counterhistory of works that have sought––with varying degrees of success––to speculate otherwise. Examining speculative texts from the 1890s to the 2010s, from Samuel R. Delany to Sense8, Lothian considers the ways in which early feminist utopias and dystopias, Afrofuturist fiction, and queer science fiction media have insisted that the future can and must deviate from dominant narratives of global annihilation or highly restrictive hopes for redemption.

Each chapter chronicles some of the means by which the production and destruction of futures both real and imagined takes place: through eugenics, utopia, empire, fascism, dystopia, race, capitalism, femininity, masculinity, and many kinds of queerness, reproduction, and sex. Gathering stories of and by populations who have been marked as futureless or left out by dominant imaginaries, Lothian offers new insights into what we can learn from imaginatively redistributing the future now.