These are a few examples of open access scholarship I have written and edited: a range of relatively informal and jargon-light presentations, interviews, and collaborations. My CV lists my other academic publications and conference presentations, and you can also read about my academic research.

In 2013 and 2017, I edited special issues of the open access journal Ada: A Journal of Gender, New Media, and Technology. 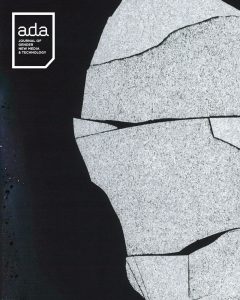 “Radical Speculation and Ursula K. Le Guin” was the theme of the 2017 special issue, published just two months before Le Guin’s passing in January 2018. It gathered talks from two panels the Tiptree Symposium that took place at the University of Oregon in December 2016: one on contemporary trans responses to Le Guin’s 1968 reimagining of gender in her novel The Left Hand of Darkness, and one on her 1974 anarchist utopia The Dispossessed as inspiration for activism. The essays explore Le Guin’s work as a model for creative artistic practice and responsiveness to critique in radical world building (Tuesday Smillie); the importance of caring labor to radical queer and trans politics (Aren Aizura); the poetics of imagining a trans world and the importance of centering trans embodied knowledge in doing so (micha cárdenas); The Dispossessed as inspiration for activism theorized by Joan Haran through the concept of “imaginactivism” and explored through reflections on activist practice by adrienne maree brown; and Le Guin’s relationship to Indigenous Anishinaabe knowledge (Grace Dillon).

The 2013 special issue, on “Feminist Science Fiction,” features 12 essays varying from dense, lyrical scholarly works theorizing science fiction feminisms, the history of physics, new media art, and somatic capitalism, reproductive futurism, and Margaret Atwood to multimedia performance; there is an audio interview about Octavia Butler, a cyborgian dollhouse, and pieces on Lois McMaster Bujold, Cabin in the Woods, Sue Lange’s novella We, Robots, brainwave-scanning technology. There’s even a piece by the grand dame of feminist science fiction theory, Donna Haraway, and a collectively written review of a new book on her work. Read more in my introduction. 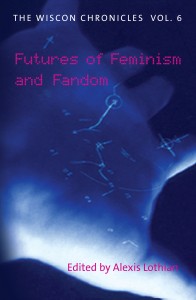 In 2012 I edited a collection on Futures of Feminism and Fandom for Aqueduct Press’s WisCon Chronicles series (Amazon link). It brings together writers, scholars, and fans’ discussions of science fiction, technology, race, gender, and many different perspectives on histories and futures.

”We are all stories,” Nisi Shawl says in her Guest of Honor speech included in this volume, and ”changing stories changes everything.” What will the stories we tell ourselves about feminism, about science fiction, and about fandom change? How will–and how should–we change those stories? This volume of the WisCon Chronicles documents the conversations, the dramas, and the joys that shaped the world of feminist science fiction fandom before, during, and after WisCon 35. From founders’ recollections of the excitement and conflict of the con’s origins, to many different, difficult conversations about intersections of race, culture, class, and gender, to new forms of fannish engagement that changing media landscapes make more visible, the contributors explore feminism and fandom’s past, present, and future.”

Together with Jayna Brown, I coedited a Social Text Periscope dossier on the theme of Speculative Life, which came out in January 2012. Our cowritten introduction discusses theories of speculation, race, and capital that are absolutely central to my work on queer futurity; I also have an essay on Samuel R. Delany and queer readers and audiences, Speculating Queerer Worlds.

In August 2011, I participated in a set of debates on the idea of ‘acafandom’ at Henry Jenkins’s blog. My conversation with Roberta Pearson, in which we discuss what it means to be a fan, the academy, industry and transformative works, is here: part one and part two.

“An Archive of One’s Own: Subcultural Creativity and the Politics of Conservation.” Transformative Works and Cultures 6. 2011. Short essay addressing some of the politics around archiving fan production; intended as a constructive and supportive critique of the Organization for Transformative Works. The full-length, fully theorized version of this is published in International Journal of Cultural Studies, and can be accessed via the “publications” link in the “CV” menu above.

Participatory Media and Vidding
The online version of a roundtable I was part of at the 2010 Digital Media and Learning conference.

Pattern Recognition: A Dialogue on Racism in Fan Communities I transcribed and edited this conversation between participants in online science fiction fandom about the antiracist theory and practice that has emerged from online debates.

The Future Stops Here My ‘scholarly vid’ in a framework of questions and quotations about reproduction, futurity, dystopia and resistance: the first of what I hope will be many experiments with scholarly form.

Interview with the Audre Lorde of the Rings For the first issue of Transformative Works and Cultures, I interviewed the three founding members of the collective behind Oh! Industry about scholarship, cultural politics and the love of media.

Two conference papers about online fandom, which I thought it particularly important to put online so that participants in the communities I talk about can access them:
• Doing boys like they’re girls, and other (trans)gendered subjects: the queer subcultural politics of ‘genderfuck’ fan fiction, presented at the Los Angeles Queer Studies Conference in October 2008.
• Televisual transformation and its discontents: online fan fiction, ‘queer female space,’ and race presented at Console-ing Passions in April 2008.

Finally, a humble blog post I want to link because it marks a sea change in my own relationship to knowledge production: Visual Thinking.

One thought on “Writing”