Like so many others all over the world, my media intake at the moment is fairly consumed by the Olympics. I didn’t plan on this; after following the terrifying militarization of London in advance of the great sporting circus, I thought that I would watch the occasional key moment on YouTube and let the rest pass me by. Given my free choice of any city in the world to live in, I think I probably would choose London, both in spite of and because of all the deep dirt and history Laurie Penny digs up in this wonderful essay. I didn’t think I wanted to see the Olympics selling it to me.

But I slipped Danny Boyle’s opening ceremony on in the background as I was settling down to work on my syllabi for the upcoming semester, and somehow I was hooked.

For a Scot who has now been living in the US for almost exactly six years (I think the anniversary of my arrival is tomorrow, actually), it was exhilarating to be thrust into a recognizable version of the culture I was raised to. I had expected humorless bombast and intensive nationalism; what I got was the British historical narrative I was raised on from a childhood in lefty, post-industrial, working-class Glasgow through to my first degree in English Literature at Edinburgh University, where I was entranced with the realization that the nationalistic hymn “Jerusalem,” with which the ceremony opened, is actually a piece of radical, egalitarian poetry by William Blake. And I thrilled to the National Health Service tribute, absurdities and all, even as it reminded me of the many fears I have about the political state of my home country.

The ceremony had the same omissions as my British education, unsurprisingly. While we were treated to extensive complexity for experiences and conflicts within the British Isles, the UK’s relationship with the rest of the world was reduced to a shallow –– if admirable in the context of what this kind of international stage could have showcased –– multiculturalism, where the country has always already been inhabited by smiling faces in a global variety of hues, everybody loves the Queen, James Bond, and Winston Churchill, and the Windrush arrived without any context whatsoever. This Storify of Tweeted responses shows how much that multiculturalism mattered to viewers, though, even if its spectacle lacked the critical or historical depth Boyle managed with some other elements.

I have to change gear a little now, though. The Olympic ceremony called me in most effectively through the part that didn’t air on the US broadcast (I was watching the BBC): a performance of the elegiac hymn Abide With Me, framed as a memorial to those who died in the bombing of 7 July 2005, the day after the Olympics were won by London. It all gets a bit personal there.

My aunt and loved mentor, Ellen Brush, was on the train that was bombed on 7 July 2005; she wasn’t injured, but the experience marked her deeply. She had spent the day before on a high: she loved that the Olympics were coming to her city, to the East End where she spent her childhood, and a couple of years later she toured the Olympic site as it was being prepared. Sadly, she wasn’t able to enjoy watching the Games; she died of breast cancer in July 2011. Although I’ve never quite found a way to write about her on this blog, academic as it is, I’ve felt myself to be living in her honor ever since. She taught me an enormous amount about how to move through the world as a professional woman, and when I’m uncertain what to do in any given situation I always ask myself what she would do. And somehow, after the opening ceremony’s sombre moment, I have found that I find myself watching the Olympics for her and with her: one more thing in her memory. 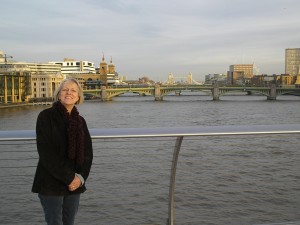